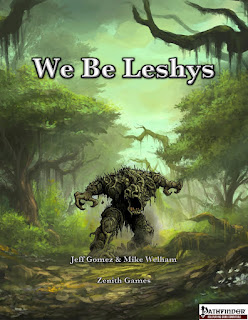 A most unusual adventure for CR 5 leshy characters.

In We Be Leshys, the players control leshys out to protect the Brindlewild Forest. They survive a deadly trap, struggle against a corrupted friend, save their creator from a dangerous mob, and take on an insane, demon-summoning sorcerer. We Be Leshys includes nine new playable leshys which combine the aspects of a classic adventuring party with true floral flavor.

We Be Leshys is a one-shot adventure that serves as an excellent introduction to Pathfinder or a refreshing break for an experienced group. It is 28 pages long and only $1.99.

Included in We Be Leshys: 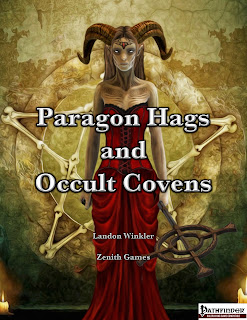 This is the life of a paragon hag. It is a dark life, overflowing with mysterious power and evil pacts. These stooped crones will do anything for power. Their terror and cruelty are legendary.

Want to write an adventure for Zenith Games (or just make sure your own adventures are up to snuff)? Follow these 12 rules.

Don't tell the PCs something if they can see it for themselves. It's much more compelling to interact with a scene then to have it explained to you.

Bad: The newspaper says Dr. Jones has killed himself. Not a good sign.
vs.
Good: You turn the corner to find a crowd of people. When you force your way past them, you find Dr. Jones hanging from a tree branch. The villagers whisper of suicide.

Don't overload your players with named characters. Two to four new important characters is the maximum for single game session. Each character should be describable in a single sentence, with one or two distinct physical and personality features. Think quirky or archetypal. More complex characters are only necessary for a few NPCs per campaign.

Additionally, NPC names should not sound anything like one another. No Sauron and Saruman, particularly if they are both evil wizards.

Bad: The dwarf before you is a stocky fellow, no more than chest height on an average human. His clothes, while well kept, are old and somewhat faded. On his left hand, he wears a ring bearing a star and lion, symbols of house Greygull. Massive black eyebrows cast a shadow onto his weather-worn face. This is a dwarf who has experienced much sorrow in his long life. Those brown eyes have seen disaster, even if the dwarf does not want to show it. Still, he maintains a firm upper lip, and talks with quiet confidence.
or
Bad: The dwarf scowls at you.
vs.
Good: Underneath the dwarf's massive black eyebrows, deep creases in his face hint at a sorrowful past.

The plot should change depending on the character's success. Simply retreating from a fight or failing a skill challenge should make life harder or worse the PCs in some tangible way. If the outcome of an encounter is the same no matter what, then that encounter does not need to take place.

Provide at least three separate clues for important points. If your PCs can't find any clues, then they still move on with the story, but are penalized in some way. Perhaps they miss a crucial bit of information, or must expend resources to proceed. PCs should never reach an absolute dead end or have to rely on GM handholding to move forward.

Bad: You didn't find the letter ... so you wait around for a few days until something happens?
vs.
Good: You didn't find the letter or the footprints, but you did stumble upon a piece of torn cloth. Even if you missed all of these, you still have your previous information to work with. You can still go to the next victim's house, even if you are woefully unprepared for the horror that awaits you there.

The PCs should never randomly stumble across any event that takes less than 5 minutes to occur. Just happening to turn the corner to witness a murder reeks of unlikely coincidence. If the PCs observe something time sensitive, it should be a direct or indirect result of the PCs actions.

This rule can be stretched for the very start of an adventure, but no further. If you don't need to stretch this rule, don't.

Bad: You've arrived just in the nick of time! The cultists only have one minute before they complete their hours-long ritual.
vs.
Good: The cultists see you approach. "Damn them!" exclaims the leader. "We need to speed this up!" He draws a knife and slits the sacrifice's throat. "It's rough, but it will do! Finish the ritual!" The cultists look panicked, but skip to the last minute of the ceremony.
or
Good: "Perfect!" Exclaims the leader as you approach. "We need the presence of a god-blood to finish the ritual!" The cultists begin the last stanza of chanting.
or
Good: It looks like the ritual is nearly complete, but the cultists have stopped to argue about something. Once you are spotted, you are certain they will put aside their differences and finish the ceremony.

6: Context: When and Where?

Every scene has relation to the previous scene. If the location is new, words must be spent describing the distance between the two scenes, the time it took to get there, and what it looks like.

Bad: After dispatching with the griffons, you make your way into the village.
vs.
Good: It's another three miles (1 hour's travel) between the griffon nest and the village. The simple wooden shacks are a welcome relief from the oppressive darkness of the forest.

7: Variety is the Spice of Life

Don't fight the same enemies twice. Don't run the same skill check twice. Vary energy damage types, weaknesses, and strengths. Throw in a trap, poison, and a haunt. Make sure that everybody, regardless of his or her build, has a chance to shine. Jacob's Tower is built on this principle.

Bad: In the lair of the monkey king, there's loads of monkey to kill and plenty of climbing challenges. Strong characters, particularly rangers with favored enemy (monkeys) will go far.
vs.
Good: The monkey king has diversified his evil villain portfolio. The PCs fight strong apes, scale a tree, murder a bunch of feces-throwing monkeys, contend with rotting banana storage, then take on the spell casting monkey king himself. Everybody has a chance to contribute.

Vary your encounters! For every one or two combats, include one skill or social encounter. Players (generally) like a mixture of both. Even better, make sure that a few encounters can be resolved through either combat or skills.


9: Encounters Move the Plot Along

Encounters move the plot along - they don't interrupt it. Don't add encounters to take up space. All encounters should be important. If you can cut an encounter without changing the plot, then do it. If your adventure is too short, then add more PLOT or clue hunting. Don't just throw in encounters.

10: Encounters Have Set Pieces
Encounters of any sort - combat, social, or skill - should take place in an interesting location that provides flavor and potential utility to the encounter.

Every fight should have some sort of gimmick. No fight should be fully described as the PCs vs. some  creatures.

There are plenty of ways to lose actions in Pathfinder and other RPGs: Blindness, curses, paralysis, etc... While it might fun to inflict these on your enemies, losing your turn is not fun for the PCs. Whenever possible, avoid giving the villains abilities that prevent the PCs from acting. In the same vein, use weakening abilities sparingly. In general, save or suck should be avoided.

Instead, damage the PCs directly or throw obstacles at them. You really need to keep a PC occupied for a round? Don't paralyze them: Thrown them in a pit, place a weak enemy in front of them, require them to pull a lever, or encourage them to flee from a bomb. These all accomplish the same thing as paralysis (eating actions), but they allow the character to have a good time by taking actions to overcome challenges.

Bad: The sorcerer has bestow curse, blindness/deafness, hold person, and phantasmal killer. Have fun watching others take actions!
vs.
Good: The sorcerer has create pit, shout, summon monster, and fireball. Also, he's got some lackies. To reach him you must pull two levers simultaneously, then scale a pillar and break some glass.

Minimize use of "that."

Minimize use of "is/was/are/has/have". Use action verbs!

Vary word usage whenever possible. Don't use the same word in a paragraph more than once (articles/prepositions/conjunctions excluded).