So you wanna be a GM.  More than that, you want to design your own world.  It is fun, rewarding, and a great exercise, but it can be a lot of work.

The easiest and most effective way of creating an interesting world is determining one specific element or gimmick.  Once you have that element, use it to inspire the rest of the world.

Below is a list of categories of world elements (and examples) to get you thinking. Pick whichever one inspires you the most, and branch out from there.   Don't try to build your world all at once.  Start with the element that you have developed strongest in your mind, and use that to inspire everything else.

Broad Gimmick:  Many world have one overlying gimmick that defines them.  All other factors stem from this point.  These elements tend to be incredibly broad and vague, but they color every aspect of the world.

Factions/Major Races:  Factions, nations, cultures, and races will likely play a major role in your campaign.  Because this element is so important, it can be useful to pick it first, then make the world suit its needs.

Conflict:  War is hell, but if can also make for excellent material.  In this world, a single conflict is so important that it defines all other factors.  Conflict is often intrinsically linked with Factions. 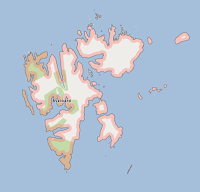 Geography:  I love maps, and often start world creation with one.  Take this map of Svalbard for example, a random island north of Russia and ask yourself "If this were a continent, what would it be like?"

World Event:  Often there is one immense event immediately prior to the campaign start which defines the world.  It likely changes all other elements, and will serve as the focal point of the campaign.

Campaign:  Perhaps you already have a broad campaign in mind.  There is nothing wrong with building the world around a campaign. In fact, it's often the only way that a campaign can be run, if you are working at the epic level.

Once you have an initial element, start asking yourself a few questions.  Given the paramaters you have set, exactly how would things go down?  Here are a list of questions to consider.  They may seem broad at first, but remember to answer them according to the World Element you have set.

Posted by Zenith at 1:10 PM No comments: