The Golden Idol trap is designed to pit character survival against character greed.  Each character is presented with a valuable, but heavy, golden idol.  When the group suddenly finds itself in a vast pool of water each party member has to decide - keep the golden idol and struggle to stay afloat, or drop the idol and get away scot free.

The Golden Idol Trap is designed for an APL of 2 - 4, although the same trap can easily be applied to characters up to level 8 or 9 (simply increase the worth of the idols).  It can also be easily adapted to an aquatic campaign.  Simply ignore the room and place the four Golden Idols in a derelict ship - a ship that sinks once the trap is activated.

The Golden Idol Trap takes place in a very large room.  The room is square, 180 feet by 180 feet, the walls made of slick, DC 30 climb stone.  The room is filled partially with water, water that extends a whopping 600 feet down into the black abyss.  Above the water there is a cavernous hundred feet to the ceiling.

Over the water, extending from the entrance of the room on one side to the exit on the other side, is an iron bridge 20 feet in width.  The bridge is anchored to the wall near the entrance and exit by a pair of chains.

In the exact center of the bridge there are four Golden Idols of a dungeon appropriate theme - perhaps dragons, perhaps gods, perhaps dwarven sculptures.  If you have fewer than four PCs, simply place that many idols, or explain that some number of the idols are missing.  The worth of the idols is immediately apparent - A simple DC 10 appraise check values them at 1,500 gp each, or about half of the expected level three PC wealth.  They have no magical aura to them - this trap is purely mechanical.  If you are playing with encumbrance, each idol has a weight of 25 pounds.

Each Golden Idol is on a pedestal. Any player attempting to remove any of the idols finds that it has some give, but it is rooted pretty firmly on the pedestal.  Tell the player that when he moves his idol, the one next to it seems to jiggle.  If more than one idol is lifted at the same time, each idol has more give.

In order to remove all four idols, all four idols must be pulled up at the same time.  If the PCs have a tough time figuring this out, then drop a hint to any trapfinders that this might be the case.  Pulling out all four idols requires 4 simultaneous strength 6 checks.  There is no penalty for failure, so the PCs may try as many times as they like.  As soon as all four idols are removed, the trap is activated.

As soon as all four idols are removed, the chains holding the bridge in place fall away.  This correlation is only visible if somebody inspects the underside of the bridge and makes a DC 20 Perception check.  The bridge, being made of iron, immediately falls into the water and starts sinking.  Roll initiative.

Now is an excellent time to point out that the idols look very valuable, and would probably fetch a pretty penny - but they are weighing the characters down.

The heroes suddenly find themselves 90 feet from the nearest land (the entrance or exit).  Those without idols can make swim checks as normal.  They can use a move action to make a DC 10 swim check to move a quarter of their base move speed, either horizontally or vertically.  Failing by more than 5 results in going underwater.

Those with idols have a much more difficult time, and cannot take ten on their swim checks.  They may spend a move action to make a DC 20 swim check to move a quarter of their base move speed either horizontally or vertically.  Scoring a 15 - 19 results in no progress.  Scoring a 14 or less on this check results in the character moving 15 feet straight down through the water.  Keep careful track of how far characters have fallen - they will have to swim back up if they want to survive!  Characters may drop idols as a free action - once the idol is out of their hands, it falls 150 feet a round until it hits the bottom of the pit.  Normal drowning rules apply.

It should be noted that for each Golden Idol a character holds beyond the first, the DC for his swim checks increases by 10.

Characters will attempt many things to help their allies.  These methods should be encouraged and rewarded.  Getting in and swimming with them, or otherwise physically helping them from the water, acts as an aid another check swim check.  If a character on land throws a rope to a character in the water, he can make strength DC 15 checks to pull the character 15 feet.  Your players will try interesting and creative methods to save each other, so come up with mechanics on the fly!

So there you have it.  The Golden Idol trap will force player to choose between wealth and their own well being.  Many characters, after sinking down to a dangerous level, will drop their idols and swim to the surface.  But some will come away scot free, and a heck of a lot richer. 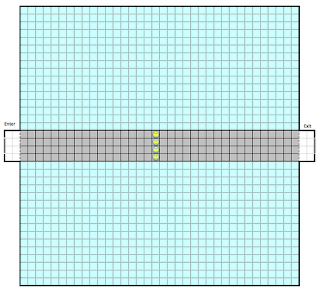