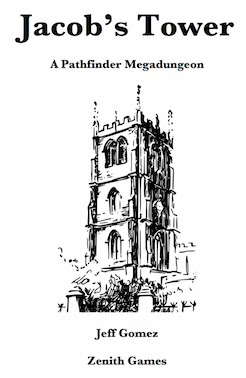 Level 13: Sorcerer is the final level of Jacob’s Tower. It features a three part battle with Jacob himself. It also describes the rewards upon completion of the dungeon, explains the secret purpose behind the tower, and reveals true identity of Nine.

The final level of Jacob’s tower can be deadly. It has three back to back APL 15 fights, a challenging and rigorous gauntlet from which not all will emerge victorious. If you have a strong group, well built or large, then you may keep them at level 12 for the level. However, if your group is smaller or less powerful, you should consider bringing them up to level 13.

Level 13 may also be re-flavored as an epic three part boss fight for many campaigns.

Jacob's Tower, Level 13 is only available within the Jacob's Tower package.  The entire package contains improved levels, enemies, traps, and fights.  Besides Level 13: Sorcerer and all other levels, it also contains an expanded foreword which goes into more depth regarding Nine and the inter-dimensional bar stop.

If you have already purchased some levels of Jacob's Tower, we will discount that amount off your purchase.  Just send us an e-mail at zenithgames.blog@gmail.com